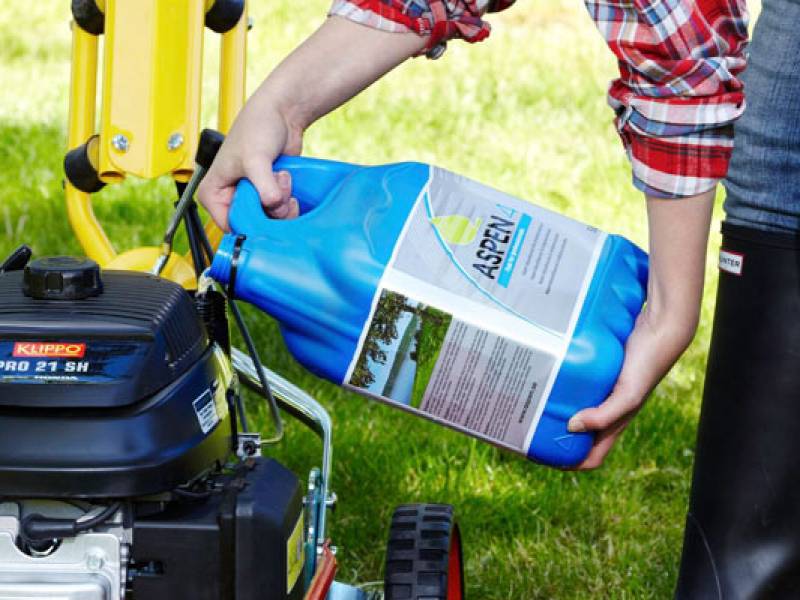 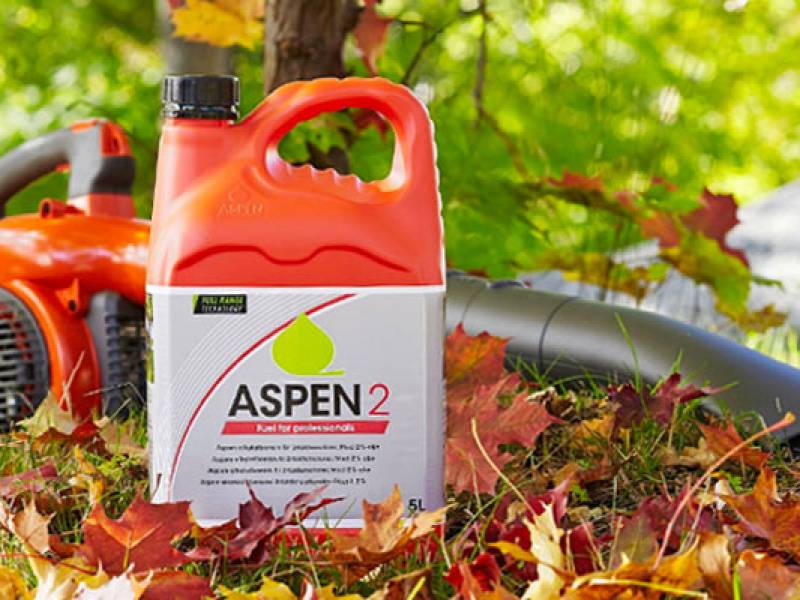 Ordinary petrol contains around 100 substances, including these harmful substances. Aspen, on the other hand, has around ten of the least harmful! This minimises the health risks from exposure to petrol fumes and exhaust fumes.

Because Aspen is a cleaner fuel, it means that the engine will be cleaner with fewer deposits. This will give the engine longer service life and greater operational reliability.

Also, ordinary petrol will slowly dissolve some plastics. Indeed, a large number of mowers are brought in to us precisely because parts (eg the primer button) have been eaten away by the petrol.

This is not the case with Aspen.

Another advantage of Aspen Alkylate Petrol is that it has a long life and will keep for between 3 to 5 years without any deterioration. Unleaded petrol, on the other hand, has a maximum life of 3 to 5 months and starts to deteriorate after a month. A lawnmower leftover winter with fuel in the tank is often difficult or even impossible to start in the spring because the petrol has 'gone off'. You will not have this problem with Aspen, and we always recommend it for petrol-powered machinery that is only used occasionally.

Lawnmower (and other garden machinery) exhausts are extremely dirty compared to fumes from normal cars that are equipped with catalytic converters.

Most people would never have their afternoon tea behind their cars exhaust pipe while it was running, but would probably happily do the same while the lawn was being mown using ordinary petrol.

One modern, 4-stroke lawnmower running on normal unleaded petrol emits as much benzene as 3 MODERN CARS, while 36 modern 4-stroke lawnmowers running on Aspen will emit as much benzene as ONLY 1 MODERN CAR. Olefins react in the body and form substances that can cause cancer. They are highly reactive and contribute to high levels of ground-level ozone (smog). Aspen contains 0.1% by volume of Olefins compared to between 5 to 18% in unleaded petrol.

Benzene causes cancers such as leukaemia and is regarded as the most harmful single substance in petrol and exhaust gases. It becomes concentrated in all living organisms. Aspen contains 0.01% by volume of Benzene compared to 1% in unleaded petrol.

Aromatic Hydrocarbons can cause chronic nerve damage (among other things), and contributes to high levels of ground-level ozone (smog). It becomes concentrated in all living organisms.

Aspen contains 0.1% by volume of Aromatic Hydrocarbons compared to 35% in unleaded petrol.

We also sell special filling aids for even safer and simpler handling. These filling spouts stop the flow when the tank is full, eliminating the need for a funnel and reducing spills and fumes.